We watched General conference this weekend and it was great. It is a privilege to watch living apostles and prophets speak. I wonder how many would go to listen to Peter or John if they were to come back and speak to us. Probably everyone would want to hear what they say. We have people today like them who speak to us as directed by the Holy Ghost and I hope more people would listen to their words.
I am putting the page for the conference sessions in Arabic below. You hit download and you can watch or listen.

We had two new couples arrive to our mission. They arrived today. The Homs and the Adams. They are great. The Adams will replace the Kearls who leave in 2 weeks. I am sad to see the Kearls go, I'll miss them. We just had dinner together. Sister Kearl cooks for all of us all the time. It was really good food and she made the best cheese cake I have ever tasted.

Today is Elder Kearl's Birthday. He is our office manager. Yesterday, we went to a play and thought we would go out to eat at Burger king since it is his favorite place. Somehow nothing is as good as the burger king in the states, but close enough. So, I got my meal and the lady gave me 1 bag of ketchup. I asked for more. She gave me this mean look and said "I already gave you some"...I said I wanted more. So she reluctantly (while complaining) reached out and gave me one more bag. I didn't dare ask for more. When I finally needed more, I decided I would ask the other guy on the counter and thought he may be nicer. So, I go up to the guy and say: "can I have more ketchup please?" He said: "Why didn't the other lady give you some when you got your meal?" Then he called the lady and said: "Did you give her ketchup?" When the lady said she did, he goes: "Well why do you want more?" Anyway, he finally reached in and gave me one then while complaining says: "Well they are 10 pence each." I said: "Well, I can pay." He said: "No never mind! just take this one." !!!???

Anyway, after eating we went to see a play. The 39 steps. It is actually an Alfred Hitchcock Mystery, but they made it into a comedy. It was really funny and very well done. Below is a picture of the theater. There are 4 people that act all the parts, so it is pretty funny how they change so fast and do it. 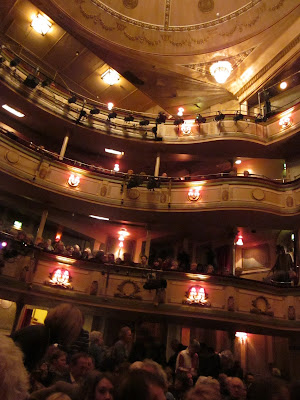 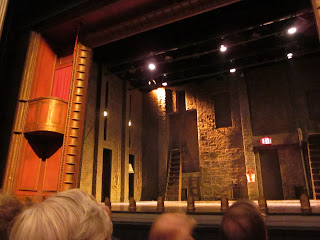